We are pleased to announce that the Valoi 360 Camera scanning system is now available in North America through CineStillFilm.com. "Valoi" is a Finnish word meaning light and creation — a nod to the creativity of analog photography. The Scandinavian roots of VALOI are visible in the minimalist and functional design. VALOI 360 is a modular film holder system that is an affordable way to digitize your rolls of 35mm and 120 medium format film using a digital camera, without compromising on features. We've partnered with the creators of VALOI 360 to bring this new modular and affordable system to photographers and creators throughout North America. Here's what you can expect with the VALOI 360: 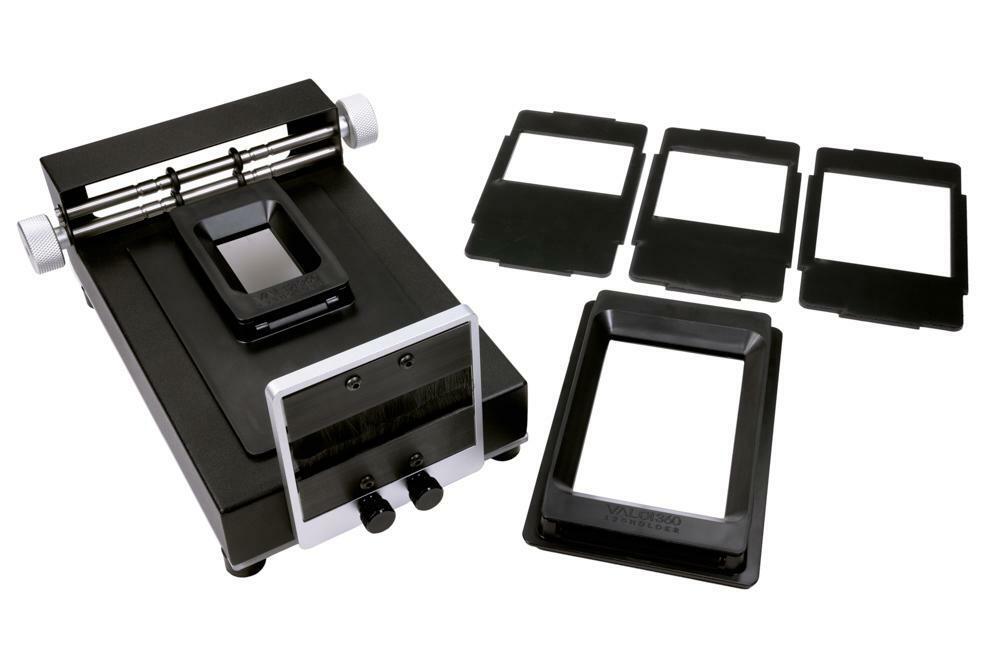 The VALOI 360 suite of camera scanning tools is designed with modularity and simplicity in mind. At the core of this system is the Advancer, the Film Holders, and the Film Masks.

The VALOI Advancer is the base of the VALOI 360 camera scanning system and features:

The Valoi 360 Film Holders for both 35mm and 120 film, that simply drop in to the Advancer, to quickly transition to scanning a new format. Each film holder can also be used independently from the Advancer, making each of them useful tools in and of themselves, and a perfect entry point for the beginner.

The double S-curved and precision-engineered track keeps the film flat, and the matte surface and built-in internal angles keep reflections off your scan. The design makes it quick and easy to scan film by allowing you to push film through the holder with ease.

The VALOI Masks are made specifically to fit into both the Advancer with a film holder on top or under the Holders if you use them without the Advancer.

While the Holders can accommodate smaller formats, some setups might struggle with stray light causing flare in the lens or reflections down onto the film, especially with the 120 Holder. In these cases, the masks mask off excess light if you are scanning a smaller format than the Holder's maximum size. They are not necessary for everyone but can be extra security if you want a clean a scan as possible.

We all know dust can be a big problem in film scanning. And wiping away dust can generate static, which just attracts more dust! That's why the VALOI Film Duster was to made to screw right onto the back of the VALOI Advancer. These anti-static brushes will capture most of the dust without generating static electricity and give you a significantly cleaner scan.​

If you want to further diffuse any dust or imperfections on the surface of your film, want to use a tablet or phone screen as a light source or you are struggling with an uneven light source, the VALOI Diffuser will give you that little bit of extra diffusion that you need to get an even scan.

The VALOI 360 camera scanning system enables easy, consistent, and professional digitizing of 35mm or 120 film negatives using a digital camera. VALOI 360 was designed to help photographers scan film quicker and, with the right setup, with higher quality than traditional flatbed scanners. Find all VALOI 360 products, including new bundles to help you get started with the system, on the CineStill Store.